The Boss of "Not Fun"

Those of you who know me personally or read this blog often know that I have a little brother who is just 7 years old. We have a 15 year difference between us which of course makes me the adult in this relationship-right? Consequently the latter also gives me the right to dictate, oppress and generally boss him around. Kids are supposed to behave. Adults are supposed to worry, obsess and calculate every possible risk that surrounds the child.
I firmly believe that my brother is utterly spoiled. He is not a brat by any means, he just always gets his way. He even has a shirt that says 'If mommy said no, ask daddy". Did I make my point? The kid owns an IPad for God's sake! Did I make my point now?
Now, I try to spend as much time as possible with him although my work schedule tends to get in the way of this. We go to the cinema, he sleeps over and we even take his dog to the beach sometimes (ok, we did that once, but we will do it again!). I like to think that we generally have fun! I even let him eat ice cream for dinner. I am a fun sister. He begs to differ. It just so happened that our mom left on a business trip yesterday and she will be away for the next ten days! I took a stand, pointed my finger at that child and said "Listen Ilya, while mom is gone, I am the boss around here". To which he swiftly replied " Ya...the boss of NOT FUN". I was speechless I tell you. Am I really the boss of not fun? Ok, so maybe I did give him a hard time about having pancakes with jam for dinner, and ya I never let him do back flips in the pool and he is certainly not allowed to cycle without a helmet- but that just makes me a sensible adult, right?
I may be just a little obsessive compulsive but in the long run he will benefit from it. I just don't want him to grow up thinking that his sister is a bore...because I can be all sorts of fun!
A few months back the husband and I witnessed a scene that is forever burnt into my brain. We were standing at the counter of Oman Dive Center and a little baby who could not be more than 10 months old was crawling half naked on the floor behind the counter. This kid was everywhere. (She?) got hold of diving equipment, climbed into baskets, ate things off the floor and eventually crawled out of the reception area...right towards the pool. No one was watching this kid. She kept on crawling until she was at the very edge of the pool and that's when I could not take it any longer, I ran to her, picked her up and brought her back to the lady who I assumed was responsible for her. The woman thanked me  and calmly said "Don't worry she almost always stops when she crawls to the edge of the pool". Seriously. I was petrified. The husband on the other hand applauded the fact that the child is growing up so freely and can explore and learn on her own and is not "wrapped in an overprotective bubble". Seriously? I cannot emphasize the extent to which I would freak out if our future kids ever get near a pool without proper swimming lessons or a life guard on watch.  The fact that Alex applauds Tarzan-like upbringing worries me somewhat.
It also makes me quite certain that when we have kids I will have pictures similar to these to share: 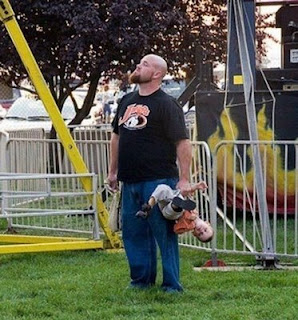