A stroke of genius!

I’ve had a lot of time to think about how I want the first artwork of the USF store to look like. It was going to be sassy but modest, chique but also relevant and above all…it was going to stand out. Given the opportunity, I expected to have at least a week to plan it out and collaborate with an experienced designer. Instead I faced a deadline of about 24 hours, a complete lack of ideas and extreme pressure.
I love it when magazines feature “behind the scenes” shots. On one side of the page you see Eva Longoria in glamorous high heels and a breathtaking gown, with her hair tossed just-right and a glimmer in her eyes. On the other side of the page the trendy editor would let you sneak a peek into the making of the photo shoot with racks of messy clothes, dozens of busy-bees huffing and puffing over Eva’s hair and make-up and the stressed-out photographer who has already gone red in the face.
When I realized I needed to put together a photo shoot for the store in about 3 hours time I of course called my best friend to the rescue and yet again she saved my ass. Throughout the day I tossed around some ideas with Is This Serious, Yuliya and mom and we decided to recreate an image I found online earlier that day. It was simple, straight to the point and allowed the imagination to run wild. So, after a hard day at work I dragged by pregnant-self to the store and picked out a few outfits for Cynthia to wear during the shoot. Oh and the shoes. And the bags.
You see…I didn’t want a page that simply featured a bag and matching shoes. We have enough of these. But I also didn’t have the time and resources to create an image that would fully convey the uniqueness and the style of the store. I wanted it to portray sexiness without seeming vulgar. Most importantly I wanted the image to be focused on the stylish items sold at the store.
Two hours of trying on clothes, finding the correct shoe sizes, crawling on the floor trying-to-get-the-angle-right and two cans of Redbull later- we were stunned by the results. I shot over 100 pictures. They all turned out exactly how I wanted them. Not bad for a rookie huh?
I will let you judge: 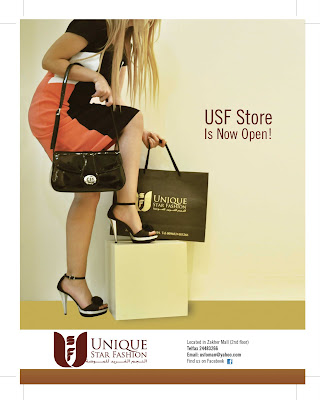 ﻿We have received a lot of supportive comments and very positive feedback from friends and families regarding the final product. Personally, I am very happy with how it turned out, given the circumstances.
I will now begin working on a Facebook page for the store where I hope to feature more images from the photoshoot to help spread the word!
During Ramadan the shop is open from 10am to 1pm and then again from 7pm to 11pm! Happy Shopping!
Posted by Olga K. at 2:56 AM